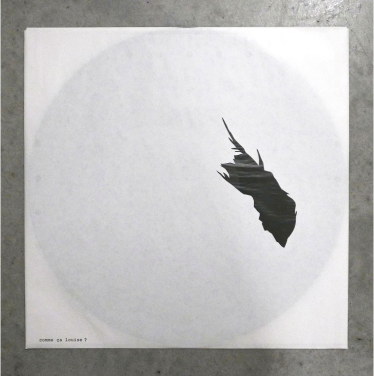 « she sees through it already

she knows that stones can break

they can explode from the inside

go through others on their way to colonise.

she knows she stole some parts of me

she depends on it. »

Guðný Rósa Ingimarsdóttir studied at the Icelandic College of Art and Crafts in Reykjavik, in the early 90s and then at the Ecole Nationale Supérieure des Arts Visuels de La Cambre in Brussels, from 1994 to 1997. She finished her education at the HISK – Hoger Institute of Fine Arts in Flanders, from 2001 to 2004. Today, she lives and works in Brussels, while still being active in the Icelandic art scene.

Gudny Rosa Ingimarsdottir works with paper, thread and various water dissolvable materials. The artist produces drawings and paintings made up of several layers, which she cuts, peels or carves, before or after assembling them, aiming to get closer to the essence of creation. Each of these unique pieces has its own geometric structure and exists on the border between abstract and figurative. The work builds itself slowly, sometimes taking years; each line traced or erased has equal value, the remaining elements have the same strength as those removed. Her compositions convey rhythm and silence. Her methodical and meditative work process that takes place inside her studio extends into the exhibition areas, transforming them into breathing spaces.

The artist has been invited by numerous institutions in Iceland and in Europe, including solo shows at the National Gallery of Iceland in 2008, the Hafnarborg Art Center (IS) in 2019 and at Iselp in Brussels (BE) in 2020. She received the Gudmunda S. Kristinsdóttir Art Fund grant in 2013.
Her works are part of the collection of the Frac Picardie of Amiens, as well as in the Centre national des arts plastiques, in Paris (FR). Other international public collections include the Djurhuus Collection Copenhagen (DK), the National Gallery of Iceland (IS), the Fédération Wallonie-Bruxelles (BE), as well as the Galila Barzilai Foundation (BE).

In his most renowned essay, Concerning the Spiritual in Art (Über das Geistige in der Kunst), Russian artist Vassily Kandinsky writes about the possibility of perceiving visual art in a similar way as we perceive music, and proposes that we can view colors and shapes in a painting in the same way as we listen to the sound and tones in a musical composition. They do not give us a predetermined picture of anything objective, but rather offer us an experience through composition, rhythm and texture.

The essay in question was written by Kandinsky in 1911 and is actually pedagogical. It was written to explain certain basic laws of art and teach us to look non objectively at an artwork. For that the author compared paintings with music, since music was already recognized as an abstract form of art. Kandinsky supported his theories of painting with the language of music and explained paintings with words like “improvisation”, “composition” and “rhythm”. Colors in a painting got musical structure as overtones and undertones, and he even went so far as to name colors after instruments. Yellow was a trumpet, red was a cello etcetera. Black and white colors were, however, not instruments., They were silent. Black, according to Kandinsky, is the end silence like when a musical composition is finished. But white is “the harmony of silence”, like silence between two notes, or silence that takes part in the rhythm of the music.

From silence comes creation. Silence is the artist’s playground. Both the painter who attacks the white primed canvas with colors and shapes and the composer who fills the air with harmonic sounds want to cover the silence. Although, as American composer John Cage rightly pointed out, one never hears absolute silence. At least not when one listens to it. There are always some sounds to be heard. The silence between two notes is in that sense not silent, no more than the color white is invisible.

John Cage is known for using silence in music to draw attention to sound. But he is also known for using words and texts for similar purposes. For example, his famous Roaratorio: An Irish Circus on Finnegan Wake is composed of environmental sounds and words. The spoken words become the melody while environmental sounds become improvisations around the melody. The words are abstract, like colors in a painting, they do not give a predetermined picture.

The same can apply to texts in visual art. A text can give a predetermined picture but it can also be abstract. And that is certainly a way we can read it in the otherwise faceted art works of Guðný Rósa Ingimarsdóttir, because even though the text is composed of words and symbols, it acts as a melody that passes through like an acoustic drawing on a silent surface.